My adorable little niece Penelope (heretofore known as Peepers) turned 1 in July, and for some reason, I am just getting around to posting about her gifts. What does one get for a 1 year old? They really don’t understand opening presents just yet; they’re often more entertained by crinkling the wrapping… banging the empty boxes together… banging the empty boxes on the dog. They will quickly grow out of expensive (read: anything pricier than Target) clothing, toys are mostly only useful for a 3-month span until developmentally they are onto something else, and just money or a savings bond – while very smart and appreciated – seems so anticlimactic, even though, yes, the kid doesn’t really understand present opening.

On another note, I just got a new Silhouette Cameo machine. I am not being paid or anything to pimp out the Cameo. Just mentioning it because at the time I was trying to figure out what to do for Peepers, I had JUST gotten the Cameo, and I wanted to play. This thing will cut paper, interfaced fabric, heat transfer vinyl, paper, templates for screen printing-esque fabric paint templates and I am sure more. I got a starter kit for the fabric printing and happen to have a bin full of scrapbooking paper (though I don’t really know why as I am not a scrapbooker). Bingo! Let’s kill two birds with one stone and make Peepers some gifts, seen below. 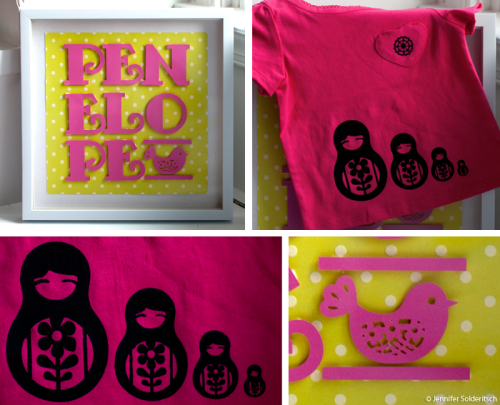 I really wanted to try out the screen print fabric paint, since I have some other ideas to work on for the Jennysold Etsy shop that would benefit from such a small-run production option. Yes, I know I said clothes are grown out of too quickly, but this was handmade, and the shirt was from Target, so I think that gives it a pass. I haven’t played with/perfected the use of the process yet, so I don’t want to post on it until I do, but suffice it to say that it’s pretty easy. However, I think if you plan on doing multiple runs of a same design, you’ll want to make sure it’s on the simpler side, as the more intricate designs take a decent amount of time to transfer. As far as the design, the nesting doll and the flower came from the free $10 artwork purchase starter card that comes with the Cameo. They’re on average $1/personal use; some have staged pricing for commercial use, and some aren’t available for commercial use at all.

Luckily, with the Cameo, you can upgrade from the free software to the $50 Designer Edition, which allows you to use any artwork you’ve created in Illustrator saved as an SVG file. This, to be totally honest, is what sold me on the machine immediately. That and the fabric arts options. Anyway, I used Illustrator to create Peeps’ name for the shadowbox and save as outlines so that when I imported the artwork, it was good to go. I believe you can also use all your own fonts in the standard edition of the software as well, but since I am way more comfy rendering art in Illustrator, and I wanted to try that out, I went there. Like above with the fabric paint, I haven’t done tons of work in it thus far so I don’t want to write about the process, but will at some point later. All said and done, it was pretty easy; I just should have picked a slightly thicker paper as the one I used was a little thin for the delicacy of the letters. Regardless, the shadowbox turned out beautifully for as simple as the design is, and I think she will really like having something “hers” like this that her Aunt Jenny made for her when she was a wee one. At least I hope so :)